Details: This listing is for a pair of Hayes birds. The photograph show is the Crowned African Crane. Please e-mail Arader Galleries for the photograph of The Numidian Crane. William Hayes, The Crowned African Crane and The Numidian Crane Each with measurements: 27 7/8″ x 17 7/8″ *Reverse images of these birds appeared in W. Hayes and family, Portraits of Rare and Curious Birds, with their descriptions form the Menagerie of Osterly Park, Vol I (1974), plates 4 and 3 respectively. William Hayes also worked according to Dixon’s method of basso relievo, but unlike Dixon and Spackman, Hayes did not derive his works from George Edwards’ drawings. Hayes used the images he had previously drawn for his own two books A Natural History of British Birds and Rare and Curious Birds in the Menagerie at Osterly Park, Middlesex for his embossed paintings. Like Dixon, Hayes did not color his own work; he hired his colorists from among his twenty-one children.

Sunset on a Rough Sea 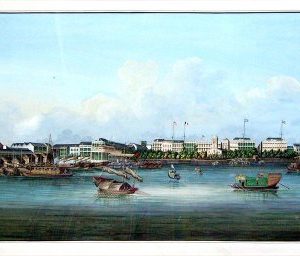