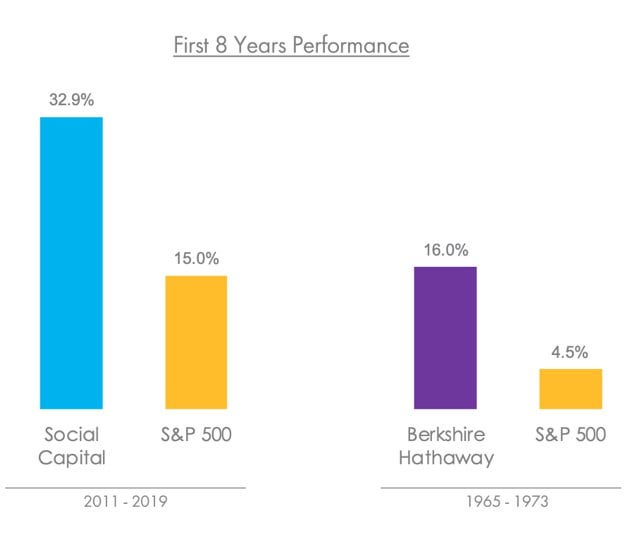 First for some context, Social Capital was founded in 2011 by former Facebook executive Chamath Palihapitiya, whose net worth is not $1.2BN (it's many multiples of this according to Chamath).

The venture fund invested in a range of companies over the years, perhaps most notably of which was their investment in Slack.

In mid-2018, they closed to outside capital and became a technology holding company.

According to Chamath, this decision was made in order to take a more long term approach and avoid the perils of the short term fee generation game that is prevalent in the venture capital industry.

As always, Chamath provides some interesting insights in the Letter.

First off, Chamath makes the argument that we are currently in the later stages of a modern Gilded Age.

The Gilded Age was an era of rapid economic growth in the United States from the 1870s to around 1900.

During this period there was rapid economic growth, wage growth, immigration and expansion of social programs.

The major industry of growth was the railroads, and a class division started to emerge with the 1% owning more than 25% of all property and the bottom 50% owning less than 4%.

Chamath argues that there are many similarities between the Gilded Age and today – both economic and societal.

But what came of the Gilded Age?

Well, the excesses and lopsided nature of the Gilded Age ushered in the Progressive Era, which was a period of widespread social activism and political reform across the United States that spanned the 1890s to the 1920s.

As well as addressing the problems caused by industrialising, urbanisation, immigration and political corruption, the Progressive movement also sought regulation of monopolies (trust busting) and corporations through antitrust laws.

Of course, Chamath is not the only high profile investor to highlight the importance of looking to the past for lessons.

Chamath highlights the rise of populism and the increasingly loud calls for change.

The question is: which companies will be broken up and when?

Drawing on the comparison with the Gilded Age, Chamath states that the only way to effectively reign in Big Tech is via trust busting.

He expects Big Tech to be broken up within the next 5-10 years, with Facebook being first on the list.

Chamath also highlights the importance of making sure that Big Tech doesn't find a way of helping write the regulations such that they can promote and cement their monopoly.

Moreover, Chamath describes the value created by Big Tech as an increasingly decaying function, while the need for true progress is increasing.

The combined R&D budgets of Big Tech total more than $600BN in the last decade.

“Big Tech promised to change the world and eradicate its evils, but it's clear that it isn't happening as they seem more focused on protecting their monopolies than advancing humanity.”

Chamath then gives his take on the market, stating that central banks have exhausted their ability to meaningfully manage inflation, in either direction, but that doesn't mean that stock prices won't continue to go higher via unnecessarily cutting rates and flooding markets with money.

“Our simple framework is this: as money gets cheaper, the credit markets continue to expand because CEOs become motivated to artificially boost Earnings Per Share. They do this by buying back stock, seek bad acquisitions, make poor capital allocation decisions or avoid taxes. All enabled by borrowing massive amounts of essentially free money. It shouldn’t surprise you to know that these decisions also result in ever increasing CEO pay.”

Now because many CEOs have bonuses that are tied to hitting a certain Earnings Per Share, this leads to an obvious incentive for corporations to buyback their own stock.

It is little wonder that Corporations are the dominant source of equity demand.

In the words of Charlie Munger:

“Show me the incentive and I will show you the outcome.”

“VCs are increasingly motivated by the incentives of up-rounds, bigger funds and fee-based compensation. The flood of fast money has created a surfeit {pronounced surf-it} of these overnight practitioners with questionable sources of capital and even more questionable backgrounds.”

“Big Tech raised a total of $1.345BN in venture capital before going public of which $1.3BN was Facebook alone. This means that Apple, Amazon, Microsoft and Google raised less than $45MM combined before IPO. Even on an inflation adjusted basis, this is incredible and tells something very important about a raft of today's startups.”

It's safe to say 2019 was a pretty good year for Social Capital.

The returns in 2019 lifted their inception to date performance by more than 350bps.

Since inception in 2011, they have compounded their money 997%, beating the S&P 500 (with dividends reinvested) by more than 3 times.

In 2019, they generated more than $1.7BN in cash and cash equivalents.

Chamath states that liquidity will be increasingly important over the next few years.

“Selling, when appropriate, and generating cash in a thoughtful way seems to be a prudent decision for the next several years.”

In 2019, they completed two transactions:

The first was an investment of more than $500MM into Virgin Galactic, thus creating the first and only publicly traded commercial human spaceflight company.

Chamath is tight lipped about the second company, but describes it as “an acquisition of a venture backed company that had raised almost $100MM of traditional VC money.”