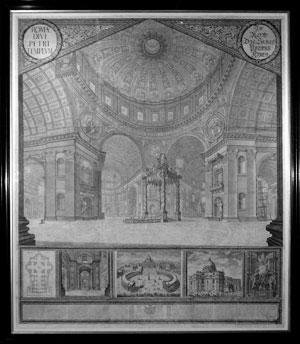 Details: Joann Andreas Graff Noriberg and Joann Ulricus Kraus “Roma Divi Petri Templvm” Rome, 1695 Copperplate engraving Framed size: 82 1/4″ x 74″ Engraving size: 73 3/4″ x 66 1/4″ This intricately detailed and wall-sized engraving of St. Peter’s Basilica fully captures the depth and beauty of the architectural and spiritual center of the Roman Catholic Church. In addition to the central depiction of St. Peter’s main altar, which is embellished by Gianlorenzo Bernini’s (1598-1680) breathtaking baldachino (a pavilion above the main altar). The architectural engraving contains five inset representations of the cathedral’s aerial layout: a nave, St. Peter’s Square, the exterior of the Basilica and Bernini’s stunning Cathedra Petri (throne). The Basilica of Saint Peter, officially known as the Basilica di San Pietro in Vaticano, is located within Vatican City in Rome. It is considered one of the holiest sites in the world and serves as the burial site of its namesake, Saint Peter, the first Bishop of Antioch and Rome and the first Pope. Churches have stood on this site since at least the 4th century. Indeed, it was here that Charlemagne and many other emperors and Popes were crowned. In the fifteenth century, Pope Nicholas V undertook the rebuilding of the choir and transepts after a design by Bernardo Rossellino. In 1452 the work was begun, and part of the choir was built. Pope Julius II decided that the entire church should be rebuilt, and in 1506 appointed Bramante as the architect. He appears to have originally planned a symmetrical Greek cross with a great dome over the center. Bramante was succeeded by Raphael (1514), Antonio da San Gallo (1520), and Michelangelo (1547), who completed the building up to the drum of the great dome. Ciacomo della Porta modified the design and completed the dome. Throughout the sixteenth century there was controversy over the final form in which the church would be built; the centralized Greek cruciform plan or the shape of a Latin cross. Th

Palaces in the Higgs Field 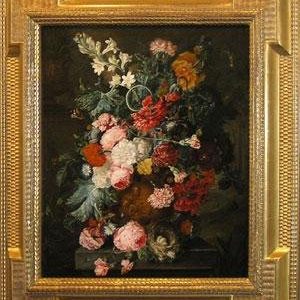 A Still life of summer flowers, roses, carnations, tulips and peonies in a terra cotta figural urn on a stone ledge with a nest of eggs and with butterflies $143,751.00